How Would West Ham's Masters Football Team Look in 2020

As the football season heads further into the distance, every fan up and down the country has been delving into the archives of the sport.
The frequent re-watching of classic games has only heightened footballing nostalgia, and it got us at 90min reminiscing of Masters Football.
Perhaps it was not appreciated enough when it was on, but as the clamour for football continues to hot up, so to does the desire for the return of that famous blue turf.
One side certain to create some entertainment would be ​West Ham, who have a history of gifted yet inconsistent players - the perfect formula for a Masters star.
Here's a look then at what the Hammers team could look like in Masters Football in 2020 - with a few rules of course... Despite being better known for his spells elsewhere, the former England stopper would certainly provide some excitement.

'Calamity' James should perhaps never have been England's number one (not his fault that there wasn't much competition), but there is no doubting on his day he was a good goalkeeper, amassing 572 Premier League appearances in total.

He can also be thrown up top if it requires. Versatile. Club Highlight: Captaining the side.

Club Lowlight: Getting injured less than 30 minutes into his debut.

While he can count himself lucky to have been picked for England (21 whole caps), it was Upson who scored against Germany in that fateful 4-1 defeat at the 2010 World Cup, - it still hurts thinking about it now.

He'd have to put a big shift in in this attacking Masters side... Club Highlight: Leading the side to the FA Cup final in 2006.

At 35, Reo-Coker just sneaks into contention for this side, and provides some much needed 'youth' in the centre of midfield.

He may never have been a superstar, but was a reliable midfielder in his time at Upton Park. Get him in the team. Club Lowlight: Suffering an ACL injury in pre-season against ​Tottenham.

Ok, he may not exactly be a West Ham legend, but the former Portugal international can certainly be described as eligible.

The man brought to England by Arsene Wenger in 1997 was particularly impressive at ​Fulham, where he became something of a cult hero as well as the club's captain.

Interestingly, he also appeared in an episode of Grange Hill back in 1999.

Anyway, none of this is about West Ham because he wasn't that good for West Ham. 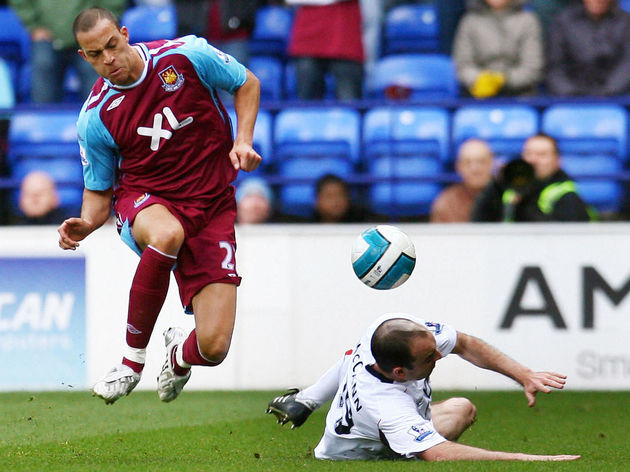 Club Highlight: Scoring the winner in the 2005 Championship playoff final.

Club Lowlight: Part of the side that lost in the FA Cup final in 2006.

'When the ball hits the goal, it's not Shearer or Cole, it's Zamoraaa.'

It's almost hard to believe that Bobby Zamora was actually a good player once upon a time.

The tall, gangly striker was a handful for any defender, and would be a real asset in Masters Football.

He also has scored winning goals in two Championship playoff finals, with one for the Hammers and one for ​Queens Park Rangers.

Club Highlight: THAT stunning goal against Wimbledon in 2000.

Club Lowlight: When he sportingly caught the ball after injury to an opposition player. No place for fair play in the beautiful game.

Love him or hate him, Paolo Di Canio is guaranteed sporting entertainment.

His exploits as both a player and a manager on these shores proved his often crazy nature, but more importantly his undoubted skill on a football pitch. It is still remarkable that he turned down ​Manchester United to stay with West Ham.

He's either very loyal, or very stupid. We'll assume loyal and stupid enough to come back for some Masters Football. Club Highlight: His goal against Liverpool in the FA Cup final. He definitely meant it...

Another who is perhaps better known for playing elsewhere, his FA Cup final goal earns him some credit among West Ham fans.

Despite being a decent full-back, it is still puzzling to this day how he got himself a move to Liverpool. Despite only playing a measly 34 games for the club in all competitions, Dyer would be a skilful and relatively youthful impact substitution.

Probably wouldn't be on the pitch for long, though. 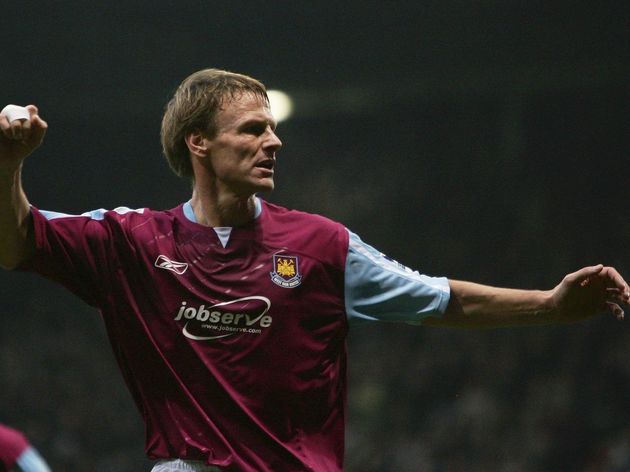 Club Highlight: Only West Ham player to score their penalty in that FA Cup final shootout.

Club Lowlight: Also happens to be a Spurs legend.

While he would be one of the oldest players in this side, there is no doubting his finishing ability and link-up play.

He arrived at Upton Park with the club in the Championship, and his 20 league goals propelled the side to the playoff final and back into the top tier.

He was recently a singing tree on the Masked Singer, so he's obviously got a lot of time on his hands.