West Ham United had Felipe Anderson to thank again as they came from behind to earn a point against Huddersfield Town at the John Smith’s stadium.

David Wagner's Huddersfield side took the lead early on through Alex Pritchard, who became the first Terriers player to score at home this season when his shot was deflected and found its way past the wrong-footed Lukasz Fabianski. Both sides then created a number of chances, with the Hammers pushing forward in search of an equaliser and Huddersfield looking to close out the game and score more than once in a match for the first time this Premier League season.

The home side couldn't add to their slender lead though, and Anderson was on the spot to fire home from inside the penalty area to peg back the Terriers and delight the travelling fans. 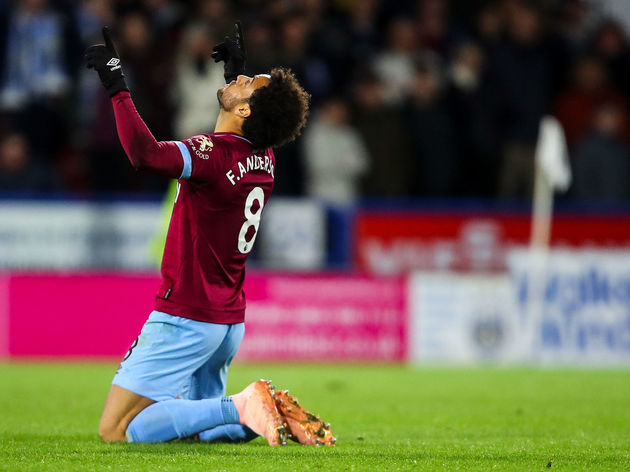 Huddersfield then gave it all after the equaliser to get the win, but the lack of a clinical goalscorer again left them unable to get the winner and both sides had to settle for a point.

Huddersfield clearly gained a huge amount of confidence from that win over ​Fulham on Monday night, and that showed here.

Their persistent pressing high up the pitch worked perfectly for them as they got higher up the pitch, got numbers forward and stopped the Hammers from playing it out from the back – and that paid off for Pritchard's goal. However it wasn't all good news. Goals still elude Huddersfield, with the lack of a natural goalscorer proving to be pivotal.

Attacking midfielder Alex Pritchard was at the heart of everything for Huddersfield, and put in his best performance of the season. He looked confident and relaxed on the ball and set up a number of chances for his side – but more crucially, got the all important goal.

He drove at the West Ham defence, shifted the ball onto his left foot and saw his shot slide past Fabianski into the bottom corner.

While Huddersfield put in a decent display, the one downside to their performance was their failure to get that second and decisive goal – and it was striker Steve Mounie that was most at fault for that.

The tall, powerful striker did press and hassle the West Ham defence all day, but he missed a number of key chances.

West Ham were again frustrating to watch, as their inconsistent start continued in West Yorkshire.

They looked nervous on the ball and gifted possession to the home side in the wrong areas on a number of occasions – one of which led to the first goal. Indeed, Pedro Obiang showed his frustration when he was taken off midway through the first half, throwing his gloves to the ground in frustration.

The Hammers weren't at their best, and will probably count themselves lucky that Huddersfield just couldn't convert their chances. They can, however, thank their star man Felipe Anderson again, who backed up his brace against Burnley last time out by scoring the crucial equaliser here. Polish shot stopper Fabianski has been the standout out performer for West Ham this season, and one of their best signings in recent years.

He was called upon a number of times as his defence struggled under the high level of pressure from Huddersfield, and kept his side in the game – enabling them to stay in the game long enough to snatch an equaliser.

He gave the ball away a number of times and critically gave away possession in the buildup to Pritchard's goal. He never seemed to recover from that, and a rethink on the amount being asked of the central defenders might be needed for the Hammers.

After the international break, ​West Ham face the toughest task in English football as they attempt to halt the Manchester City juggernaut when they welcome them to the London Stadium on November 24th. Meanwhile, ​Huddersfield will look to continue in their quest for ​Premier League survival when they visit Molineux to take on Wolves a day later.