Jarvis hoping Hammers can kick on 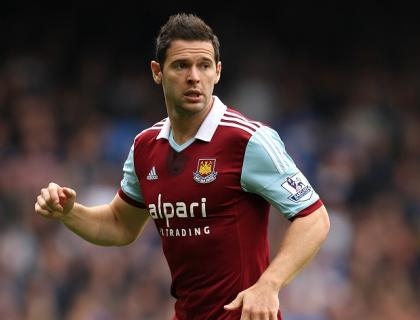 The Hammers beat Tottenham 3-0 in October for their first White Hart Lane win in 14 years, but had won just two of 10 matches prior to Wednesday night's Capital One Cup quarter-final success.

Jarvis, with his second goal of the season, cancelled out Emmanuel Adebayor's opener with 10 minutes remaining before Modibo Maiga headed in the winner to secure a 2-1 victory and set up a semi-final against Manchester City.

"It was a fantastic result for us," Jarvis said on West Ham TV. "This could be a massive springboard for us and it's just what we needed.

"It was a win and a good performance, and hopefully we can take it into the weekend now.

"I'll be looking to kick on from this, too. I was really pleased to get on the scoresheet."

The two-legged tie with City takes place in January, but of more immediate concern is the Premier League and Saturday's match at Manchester United.

West Ham are 17th in the table and the other four clubs in the bottom five have changed their manager.

Sam Allardyce took comfort from the League Cup win at Spurs, but knows his side must do what they failed to do after the Premier League victory at White Hart Lane and carry the momentum forward into a festive programme which includes meetings with United, Arsenal, West Brom and Fulham.

"For me, the challenge is to get the players to kick on from this.

"When we beat them last time, I thought we'd go on a run of results and pick up more points than we have done.

"I don't know where we'll go from here but it's just a fantastic result and the lads are absolutely delighted."

Allardyce made seven changes to his starting line-up following the goalless draw with Sunderland and praised his squad.

"The squad is struggling for numbers at the moment, but what a fantastic performance from those who took part," the manager added.

"The players that have stepped in like Matt Taylor, Alou Diarra and Jack Collison, and Adrian in goal have done a fantastic job with the rest of the team.

"You have got to play to your best to give the fans something to cheer about and we have sent them home extremely happy, having beaten the old enemy again, twice on the trot.

The winger said: "All that was going through my mind when I saw Matt Taylor laying it off was to get on the end of it and hit the target.

"I did that and I'm absolutely delighted that it went in, especially in front of the West Ham fans.

"That's what it's all about, scoring goals, and to do it in front of your own fans is a fantastic experience and let's hope we can get a few more."

The 27-year-old praised match-winner Maiga, who netted his first goal in a year to seal victory.

"He took his goal really well and I'm delighted for him," Jarvis added.

"It's all about confidence and hopefully his first goal of the season will push him on now."