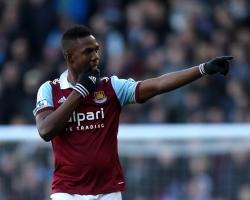 The Mali forward came off the bench to score once and set up another as the Hammers played out an eventful 3-3 draw against West Brom on Saturday.

Maiga was also the man to score the winning goal against Tottenham to set up West Ham's Capital One Cup semi-final date with Manchester City, but it is their form in the Barclays Premier League which has everyone at the club looking worried.

Sam Allardyce's side have taken only two points from their six league games in December, but Maiga reckons there is not much that needs to be put right.

"I think overall there's not much wrong, perhaps a slight lacking in confidence," he said.

"The only solution is to work hard. Hard work and then, ultimately, we'll see how it goes. We'll carry on working hard and I believe it's just the small things that are missing right now - but we'll be OK."

The draw leaves West Ham 19th in the table, with a trip to fellow strugglers Fulham to come on New Year's Day, and Maiga wants to build on the performance at home to the Baggies rather than dwell on what might have been.

"It is true that we're all disappointed (to draw)," he said.

"It was a tough game physically. Though we're disappointed, the most important thing now is to pick ourselves up for the next game, so that things turn in our favour.

"Every point is important and the most important thing on Saturday was not to lose. We've got to try to continue to play as we did in the second half."

Maiga's second-half goal was his first in the Premier League in over a year and just his second in 16 appearances so far this season.

The 26-year-old was carrying much of the attacking burden during the early stages of the season but is now battling with re-signed Carlton Cole for a place in Allardyce's side.

With Andy Carroll still recovering from his heel injury, Allardyce has played with no more than one striker so far this season and Maiga is still adjusting to a change in approach.

"Though I'm not that used to playing in this system, I've dealt with it and I'm pleased to have scored. It's reward for me and for my work and I hope it's going to continue."

West Brom had fallen behind to Joe Cole's strike before Nicolas Anelka netted his first two goals for the club to turn the game on it's head before half-time.

Maiga's goal and his assist for Kevin Nolan put West Ham back in front, with Saido Berahino scoring the last of the goals to earn the Baggies a point.

Berahino, who recently signed a new deal at the Hawthorns, is looking to continue scoring for his club.

"I'm just looking forward to the next game now," he said.

"The team spirit has been brilliant, we went behind but we came back. I want to thank my team-mates because our spirit is high.

"We have stayed strong as a team through a difficult period and we just want to get through this."

Downing refused to take any credit for his chopping and changing of the side to freshen things up over the packed festive schedule and was keen to praise the players for their efforts.

"I thought from Hull, Tottenham and twice coming back against West Ham is down to the players' attitude to get themselves back into the game," he said.

"You can say I make changes and substitutions but you're only trying to help. It's the XI on the field who make it happen.

"I could sit here and take all the adulation - but I won't. The players have responded really well - that's what they do. You can only advise and try and encourage, and give a little help with a tactical change here and there but the players have to do it."