​West Ham manager Manuel Pellegrini was happy to leave the John Smith's stadium with a point after his side's second half come back earned them a 1-1 draw against Huddersfield.

The game summed up the Hammers' inconsistent start to the season after they went behind inside five minutes when Alex Pritchard struck from 20 yards. 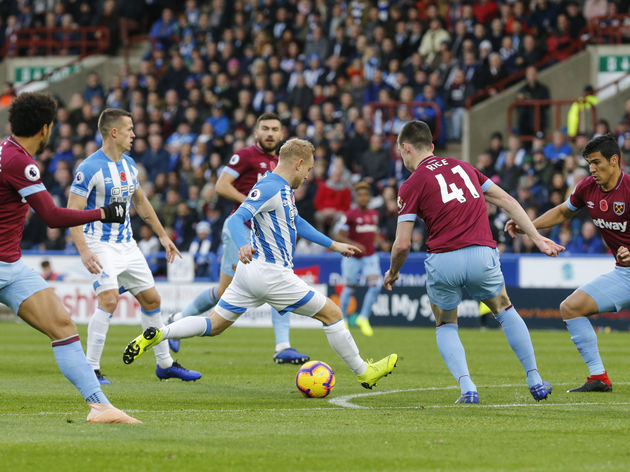 West Ham were really struggling to handle the high intensity pressing game that Huddersfield had been instructed to play by manager David Wagner. This meant that the Hammers' Polish goalkeeper Lukasz Fabianski had to keep his side in the game with a string of impressive saves with Huddersfield failing to put the game to bed.

They were made to rue those missed chances as West Ham finally got going and improved late on with the equaliser coming from their in-form Brazilian Felipe Anderson.

Having come into this one as firm favourites after their 4-2 win over Burnley, it quickly became apparent​ that ​West Ham could easily have lost so it is clear to see why Pellegrini was the happier manager at full time after coming away with a point.

​Sky Sports report Pellegrini as saying post-match: "I'm happy because we didn't play well. Maybe before the game the media and a lot of people thought [West ham would beat] Huddersfield because they have only won one game, but I said before that in the Premier League there are no easy games, every team plays with intensity.

"Liverpool came here and won just 1-0. Today we found a team that we've prepared to play all week, every cross, every shot and every second ball is dangerous and in that sense they did it better than us. In the second half we improved and created some chances but not enough to win the game. "All these games where everyone thinks you've won before you play are the most dangerous so maybe in the first half they didn't believe. I repeat, ​Huddersfield if they are winning or losing always play in the same way with intensity so if you don't play with the same pace it's difficult."

Pellegrini will need a much better performance from his side after the international break when they welcome ​Manchester City to the London stadium. If they perform like they did against ​Huddersfield it will be a tough day for the Hammers as City will not be so forgiving with the chances they have in front of goal.