​West Ham manager Manuel Pellegrini praised his side after the Hammers saw off early pressure from Cardiff to emerge 3-1 winners on Tuesday evening.

​Lukasz Fabianski saved a penalty before Lucas Perez bagged a brace and Michail Antonio added a third, with City netting a consolation in second half injury time through Josh Murphy.

2️⃣ goals and a Man of the Match performance 👊 pic.twitter.com/ou2ccozGrE

“It was a good game with a good result,” Pellegrini told West Ham's ​website. “Maybe it was different in each half – the first 45 minutes we didn’t play so well, but in the second half we made more movement to create the space to try to score.

“I was pleased to see that the team wasn’t nervous when we didn’t score in the first half. Sometimes in that situation you can start to play faster than you need in the second half, but we were calm, we tried to keep continue believing in what we do every day and that was the reason why we scored the goals.

Pellegrini also singled out ​Irons forward Lucas Perez, whose match winning performance came after he replaced the injured ​Marko Arnautovic in the first half.

He added: “I’m very happy for Lucas because he is a player who has arrived with me at West Ham, and for whatever reason he hasn’t had too many chances before, but the important thing is the player takes the chance when they have it and he did very well tonight.

“You never know what might have happened had that penalty gone in. We would have been losing 1-0 and the away team could have finished the first half in front when they didn’t have a shot on our goal before then and we had three clear chances, but it was a very good save for Lukasz. 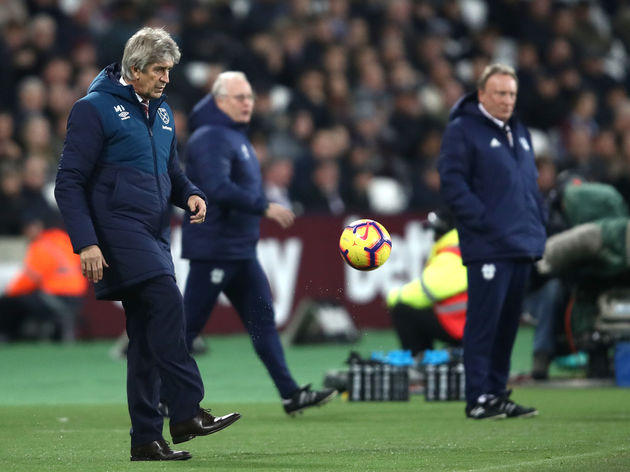 “It’s good to believe in what we are doing. In every game we try to win from the first minute whether we are away or at home, and maybe that change of style is not easy to do in a short time, but game-by-game we are improving.”