​West Ham manager Manuel Pellegrini has his sights set on a successful December following a slow start to the Premier League season.

​The Hammers currently find themselves languishing in 13th place, having won just 12 points from the 39 on offer so far this term. However, the Chilean will be encouraged by his side's upcoming run of fixtures, with seven of their next eight opponents currently sitting in the bottom half of the table. The Hammers have won just once in their last seven games in all competitions which included two defeats to bitter rivals ​Tottenham Hotspur. Their recent poor run culminated in a 4-0 mauling at the hands of ​Man City last weekend, a result which didn't reflect the game as a whole, according to the West Ham boss.

“I think we gave our all to beat them and we didn’t lose the game because it was Manchester City,” Pellegrini told the club's website​. “We created as many chances as they did but they scored and we didn’t.

“I am not happy about the goals we conceded...but I am happy about our spirit and the way we played from the first minute to the last, and the fact the players always believed they could win."

Despite his obvious aggravation at the weekend's result, Pellegrini remains positive for the remainder of the season, and demands his side turn their fortunes around over the hectic Christmas period. 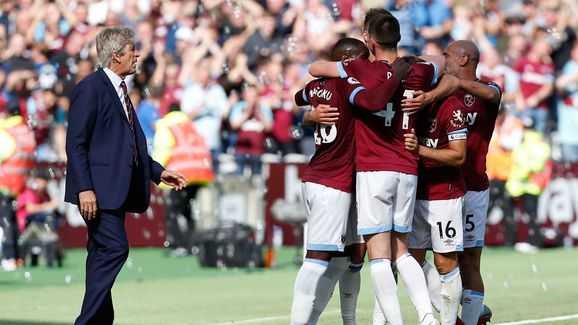 “Our next seven games are against teams who are around us in the table and we must try to add as many points as we can, but it doesn’t mean they will be easy games.”

West Ham kick off their festive fixtures against ​Newcastle, knowing a win would create some breathing space between them and the relegation zone.