Sheffield United host West Ham on Friday night to get the ball rolling on the weekend's Premier League action.

Both sides faced lower league opposition in their most recent outings in the FA Cup third round - the Blades saw off AFC Fylde 2-1 at home while West Ham won 2-0 away at Gillingham.

But attention now switches back to the Premier League and the hosts will eye the visit of the Hammers as a good opportunity to recover from losing two on the bounce in the league, even if those defeats did come against ​Manchester City and ​Liverpool, with United still sitting eighth. ​West Ham are in far deeper trouble, lying in 16th at the other end of the table but are enjoying the new manager bounce since David Moyes was appointed for his second stint at the club.

In Moyes' first and only league game since his return, the Hammers thumped Bournemouth 4-0 at home and will look for a repeat performance at Bramall Lane on Friday evening. The XI will be unrecognisable from the team that edged past non-league Fylde with first-choices Dean Henderson, Chris Basham, Jon Lundstram, Jon Fleck and Lys Mousset all likely to be recalled. The home side have a clean bill of health so Wilder has the luxury of choosing from a full squad.

The visitors also made wholesale changes for their FA Cup encounter and will revert to full strength when they make the trip to Bramall Lane.

Captain Mark Noble will return to lead the side and should be brimming with confidence, following his two goals against ​Bournemouth in their last league game. On the injury front, Moyes remains without long term absentees Jack Wilshere and Andriy Yarmalenko as they continue their recoveries.

In this season's earlier Premier League contest between the two teams, the game ended 1-1 at the London Stadium in October. 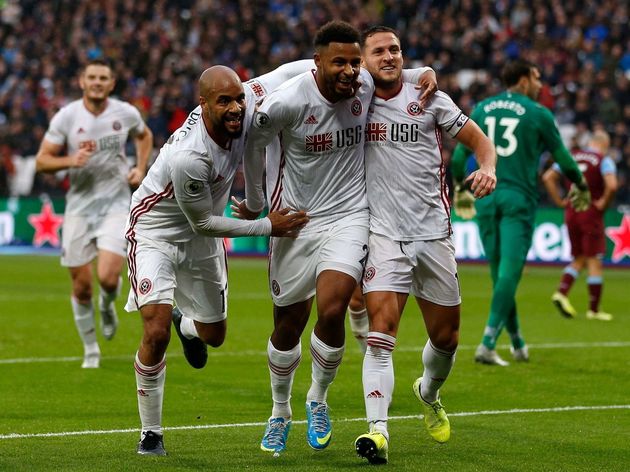 Robert Snodgrass put the Hammers in front on the stroke of half-time but Lys Mousset's equaliser midway through the second half ensured the spoils were shared.

That encounter was the first time the sides had played each other in the league for over 12 years due to the Blade's prolonged absence from the top flight.

The last meeting at Bramall Lane ended in a 3-0 victory for Sheffield United as goals from Michael Tonge, Phil Jagielka and Jon Stead sealed a comfortable win in 2007.

Despite losing back to back games against champions-elect Liverpool and reigning champions Manchester City, the Blades will be more than happy with their position of eighth in the table. Wilder's men won't dwell too much on the defeats and prior to those games had gone four unbeaten in the league, recording three wins and a draw. In fact, during a hectic December, the Blades suffered just two losses from seven league games, beating both Norwich and Brighton on the road during that period.

West Ham's form has been far from desirable, hence the sacking of former manager Manuel Pellegrini after the home defeat to ​Leicester. But those in east London have reason to be optimistic following the return of David Moyes, especially given their performance against Bournemouth. Moyes will need more of the same if he is to haul the Hammers away from the relegation zone - currently they sit just two points above the drop.

Here's how the sides have fared in their last five games in all competitions.

This game would be a lot easier to call if Pellegrini was still in charge, but Moyes' arrival makes it much trickier. But although West Ham made a winning start to Moyes' reign, Sheffield United will be desperate to get a win in front of their home fans and the Blades have been impressive on their own patch this term. Wilder's men have already taken points off both ​Manchester United and ​Arsenal at home this campaign.

It will be a close affair but with the Bramall Lane faithful roaring them on, the Blades will put their recent league losses behind them and chalk up a victory here.