Soccer Six tournament at the Mile End Stadium on Saturday 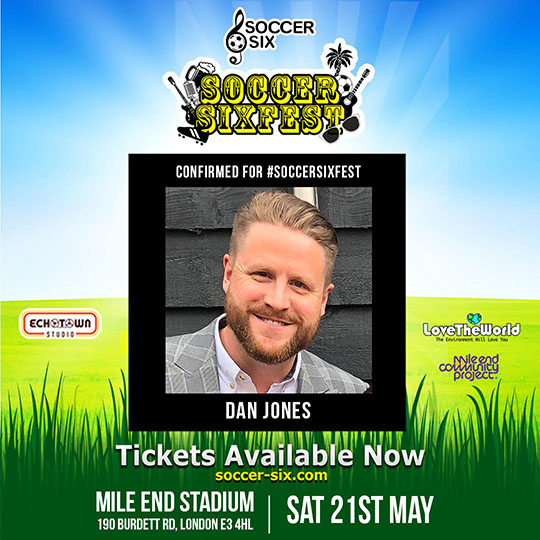 Our Operations Manager Dan Jones has been signed up to play in this Year's Soccer Six tournament at the Mile End Stadium on May 21st 2022.

Dan hopes to assist in raising awareness for some amazing causes, local charities and community projects.

What is Soccer Six?

Soccer Six is a celebrity Football tournament that has been running on a yearly basis since 1995.

In more recent times, Soccer Six has stayed at the forefront of delivering fresh content by embracing influencers, Viners and Bloggers who play a vital role in raising awareness via their hugely followed channels.

Many ex-professional footballers have volunteered to take part with some big hitters like; Paolo DiCanio, Paul Gascoigne, Ian Rush, John Barnes, Ray Parlour and Vinnie Jones to name a few. Gazzers daughter Bianca will be at this year's event.

Some of the sponsors, partners, companies and clients that have been and continue to be involved with Soccer Six include; Apple, Microsoft, BT, HSS Hire, Capital FM, Intel and many local councils for the various Stadiums the tournament has been hosted at. These include the stadiums of Liverpool, Chelsea, Fulham, Millwall and Mile End.

In this year's tournament #soccersix is teaming up with #lovefootball which is a celebration of football transcending race, religion, nationality, age, ability, sexuality and gender.

Soccer Six has also teamed up with their neighbours at the Mile End Community Project and will be raising awareness and monies while supporting their environment and sports community projects in the future with mentoring, coaching, event tickets and equipment.

To book tickets and for more information please visit the website - https://soccer-six.com/

If you are unable to make it, Dan and everyone involved with soccer six and football.co.uk would be hugely grateful if you could share the event via your social media platforms.