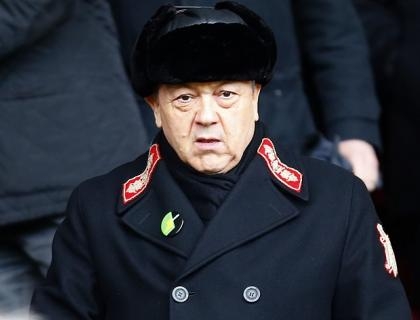 Carroll has not played for the London club since his move from Liverpool was made permanent in the summer, with Sam Allardyce's side managing just 13 goals in 15 Barclays Premier League games in his absence.

The 24-year-old has spent much of his rehabilitation receiving treatment in Belgium and Holland but is still at least three weeks away from returning from a double fracture in his right foot, which was sustained as he battled back from a heel problem.

"Had we known he would be out for this long, we would not have signed him," Sullivan told the BBC's Football Focus.

"We are not a rich enough club to deal with that. You know any player can get injured, but we can't buy a player knowing he is going to be out for half the season.

"When we signed him we were assured by the medical staff that the very, very latest he would be back was September 1. That would have meant he would only miss two league games."

Sullivan retains hope Carroll will prove his worth for the club, though, saying: "If you ask me the same question at the end of the season, I hope I will be able give you a different answer and say 'Yes, it was the right decision to sign Andy Carroll'.

"He is a fantastic player and on his day he is unplayable. We love him and that is why we signed him. He is desperate to come back; he is sweating blood in training."

Sullivan acknowledged he was worried about the depths the Hammers have sunk to in Carroll's absence - Allardyce's team headed into Saturday's game against Sunderland outside the relegation zone only on goal difference.

"I am deeply concerned," he said. "Anybody who looks at where we are in the table and is not concerned are kidding themselves."

However, he maintains confidence in Allardyce.

"I really believe Sam is the man for the job," he said.

"If he wasn't our manager he is exactly the type of manager you would be bringing in to be the manager. Where do you get someone better than Sam to do the job that is now necessary?

"If you asked me what kind of season Sam has had up to now, I would say 'disappointing'. But let's judge him at the end of the season.

"I think the Newcastle manager would have been sacked by most fans after a month of the season but now he is flavour of the month."