West Ham continued their fine form of recent weeks with a comfortable 2-0 victory against Newcastle at the London Stadium on Saturday evening.

The Hammers took the lead early on as Declan Rice powered home a header from the game's first corner in the sixth minute. 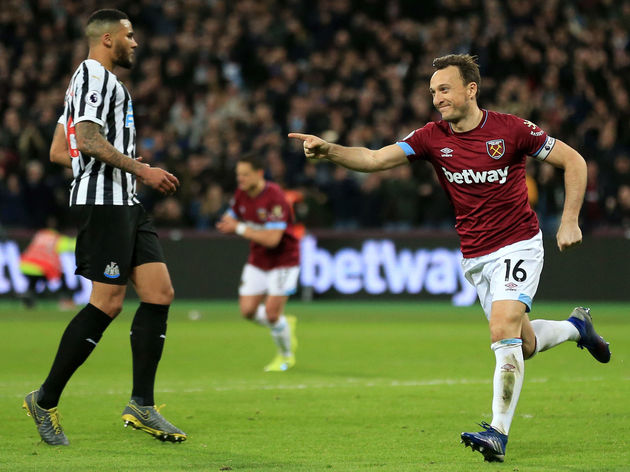 A rash tackle from Florian Lejeune on Javier 'Chicharito' Hernandez then gave West Ham the opportunity to double their lead from the penalty spot in the 41st minute. Mark Noble stepped up and made no mistake, dispatching his effort into the roof of the net.

Despite a significant amount of second-half endeavor, Newcastle could not find a route back into the match as West Ham held out for a comfortable three points.

Manuel Lanzini made his first start in 293 days as the fan-favourite finally returned from a torn ACL, suffered in June, to play the full 90 minutes.

A constant source of entertainment and incision last season, West Ham fans will be delighted to see the little midfielder return to the pitch in claret and blue. Despite playing in a deeper role than accustomed to, the Argentine looked as though he had never been injured, slotting seamlessly into the middle of the park alongside Rice and Noble, while linking up with Felipe Anderson in attack. Occupying the half-spaces in midfield, Newcastle seemed unable to get to grips with Lanzini, as he offered a consistent outlet for the other ten West Ham players.

If this commanding victory over Newcastle was anything to go by, Hammers supporters will be licking their lips at the prospect of a fully fit attack. With Lanzini set to grow into this side, Manuel Pellegrini will have a potent collection of attacking options with the likes of Anderson, Hernandez, Marko Arnautovic, and Samir Nasri all available alongside Lanzini.

In the battle of two highly-rated young English midfielders, Declan Rice showed Sean Longstaff why he is being strongly considered for an England national team berth.

A virtuoso performance from the youngster saw Rice and West Ham completely dominate the midfield, providing the perfect platform for an authoritative Hammers performance.

​​In addition to his solid all-round game, Rice continued to show his goal-scoring prowess, nodding home from a corner, for his second goal in his last four Premier League matches, also proving to be the winner on the night.

Fresh off of his Premier Player of the Month nomination for January, Sean Longstaff showed why he still has much to learn before he can be mentioned in the same breath as the Premier League's elite midfield players, with a performance to forget at the London Stadium.

A sub-par first 45 minutes saw Newcastle's midfield thoroughly dominated by their East London counterparts, as Longstaff struggled to come to terms with West Ham's combination of power and sharp passing. There were a few positive moments for the Englishman including a delightful chipped ball played out to the right-wing, but all in all, it was not the youngster's finest outing, as he was withdrawn by Rafa Benitez at half-time while sitting on a booking.

Despite his side succumbing to defeat, Jamaal Lascelles once again proved why he is the irreplaceable man on Tyneside, with a strong captain's performance. Although the centre-back certainly was not flawless, it is hard to fault him for the goals.

The Englishman can hold his head high after his strong defending kept the score to a minimum, and his commanding presence will certainly be needed as Newcastle look to respond from a poor defeat.

Lascelles was good today, Lejeune and Schar were not 😞. Rondon better second half, but was lazy first half. Need to keep this up for 90 mins, got Shelvey, Fernandez and Yedlin ready to play! #NUFC

Jamaal Lascelles is too good for Newcastle. #WHUNEW

​​A constant source of talent and determination, Benitez might find it challenging to hold onto his captain with big clubs from England and abroad likely to show interest in Lascelles this summer.

West Ham will be eyeing maximum points from their next two matches as they face Cardiff and Huddersfield, both of whom find themselves in the drop zone. First up is a trip to Wales to face Neil Warnock's struggling side.

Newcastle welcome Everton to St. James' Park next as Rafa Benitez looks to continue to distance his team from the relegation battle.