Leicester twice came from behind to snatch a 2-2 draw late on away to West Ham at the London Stadium in an entertaining Premier League clash on Saturday.

West Ham started much the better team and capitalised on their early dominance through a fine Michail Antonio header 37 minutes into the first half, the winger converting an excellent cross from Mark Noble to cap a strong start from the Hammers.

The Hammers continued to look strong in the second half but Leicester grew into the game after the interval with more threatening attacking spells, and Jamie Vardy was on hand to equalise on the 67th minute, nipping ahead of Fabian Balbuena to turn home a Ben Chilwell cross.

​West Ham responded well to the visitors' reply, and Lucas Perez made a quick impact after coming on with ten minutes remaining. The striker was only on the pitch for three minutes before he fired home a rebound from an initial Pedro Obiang effort to haul the Hammers ahead again.

It ends all square at London Stadium. A late Harvey Barnes strike means we share the points.#WHULEI #COYI pic.twitter.com/nBXQ0soWWi

Five minutes were added on as stoppage time though, and ​Leicester capitalised with another fightback. Harvey Barnes was slipped through on goal, and the youngster produced a fine finish across Lukasz Fabianski to snatch the equaliser and his first Premier League goal.

Manuel Pellegrini opted for an attacking team selection which featured an offensive quartet of Marko Arnautovic, Felipe Anderson, Michail Antonio and Robert Snodgrass all in the starting lineup, and the Hammers were rewarded with a strong start which saw them take control.

The home side carried the game to Leicester early on, taking the initiative and driving at Leicester as Pellegrini's team selection appeared to indicate was the intention.

If anyone wants to tell me Snodgrass adds nothing then come fight me. Great deliveries from him.#westham #COYI #WHUFC

Excellent celebration from Antonio as well after his goal as he laid down on the new claret carpet and stroked it lovingly. #WHUFC

Can Anderson actually do something so I can stop thinking "what a waste of space"?#whufc #westham #COYI

Obviously this is a nailed on hat-trick.

That goal came from some very patient play on the left flank between Masuaku, Noble and Snodgrass. They took their time, waited for the opening and Pereira eventually lost concentration, Antonio punished it. Really good goal. #WHUFC

Antonio provided effective power and purpose from the right flank, as was best displayed through his opening goal in which he produced a strong header to give his side the lead, though Arnautovic and Anderson did not match the same levels of attacking intensity. 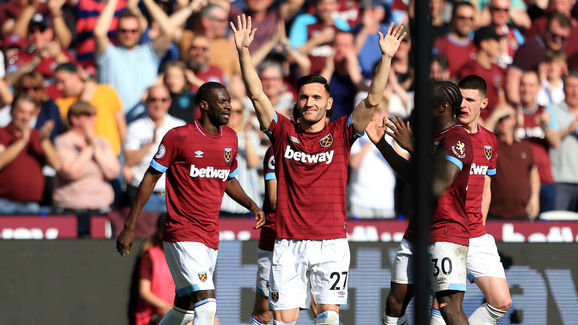 STAR MAN - Antonio and Snodgrass produced influential attacking displays, but Mark Noble once again proved why he remains so important to the Hammers with another strong all-round display. 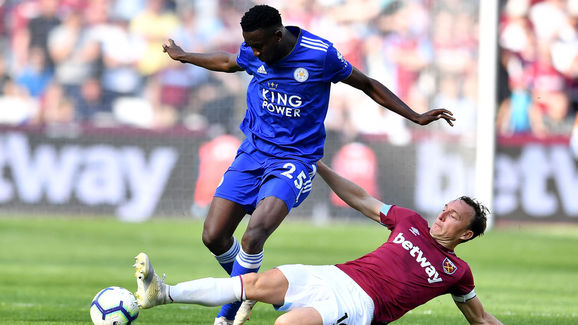 The West Ham captain held things together for his side in the middle of the park with typical composure and leadership, and provided a fine reminder of his technical ability with a decisive cross to assist Antonio for the home side's opening goal.

Brendan Rodgers sides typically dominate football matches, but Leicester struggled to get on the ball at the London Stadium anywhere near as much as the Irishman would expect of his team.

Jamie Vardy struggled to get into the game as the Foxes failed to take any consistent control over proceedings, leaving the visitors devoid of any real attacking threat in the first half as a result of their danger man being largely nullified.

Pretty disappointing 1st half from #lcfc! Mostly #WestHam on the attack bar for a few fairly poor counter attacks! Hammers deservedly lead 1-0 at the break. #WhuLei

Wow, what a goal by Vardy. #LeicesterCity #LCFC

Rodgers dropped Harvey Barnes in favour of the more industrious Marc Albrighton, but the youngster was brought on early in the second half and his introduction coincided with Leicester growing into the game in the second half as the Foxes fought back after the break. STAR MAN - Leicester lacked the levels of control and flair which have come to be expected of Brendan Rodgers' bright attacking stars in recent weeks, but James Maddison was typically the one Foxes player who always looked to make something happen for his side.

Imagine not nominating best Young midfielder in Europe at the moment. James Maddison.

The midfielder has a strong creative brain, always looking to get on the turn and find a key pass, and grew into the game even more following the introduction of Harvey Barnes as the pair linked up well.

​West Ham travel to face Tottenham away in a huge London derby in the Premier League next Saturday, whilst Leicester have a couple of extra days to prepare for their clash with Arsenal at the King Power Stadium next Monday night.