The Hammers are due to host Southampton at the London Stadium at 3pm, with the Women's FA Cup final kicking off against Manchester City at Wembley at 5.30pm. 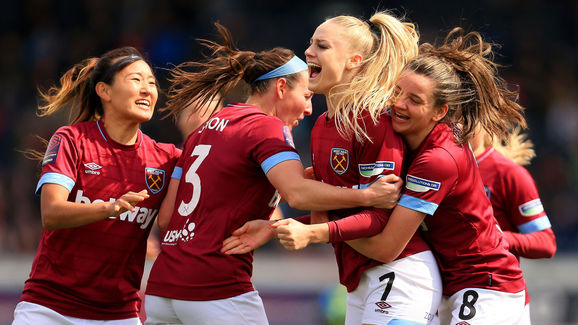 Having never previously reached the Women's FA Cup final, the club has been keen to find a way to get even more fans to Wembley to support the likes of Gilly Flaherty, Jane Ross and Alisha Lehmann for the biggest game in West Ham Women's history.

West Ham have explained that they requested the kickoff against Southampton, the final home game of the 2018/19 season, be moved from 3pm to 12.30pm, allowing supporters to then travel onwards to Wembley in time for kick-off there at 5.30pm.

However, the Premier Leagued rejected the proposed change, citing potential inconvenience to fans who had already bought tickets and arranged travel for the original 3pm kick-off.

A club statement read, "To give supporters the chance to attend both that game and West Ham United's women's FA Cup final fixture against Manchester City at Wembley later that day (5.30pm), the club had requested for the clash with the Saints to be brought forward to 12.30pm.

"Despite the club's very best efforts, it was decided by the Premier League that it wouldn't be possible due to the potential inconvenience caused to supporters who had already planned their journeys and purchased tickets.

"Therefore, the game will remain at the originally scheduled time of 3pm. West Ham United is naturally disappointed but would like to thank all of our loyal supporters and sincerely appreciates the fantastic backing they give to all who pull on the famous claret and blue." Even though West Ham fans going to the Southampton game will be unlikely to make it to Wembley in time to see the Women's FA Cup final in person, they will still be able to catch it live on free-to-air television, with the contest being broadcast on BBC One.