Out of those called up, only three have been first time regulars this season for the Hammers, who despite defeat at home to Crystal Palace on Saturday have enjoyed a reasonably good start to the season, sitting in eighth in the Premier League.

With the international break upon us, here is a look at which players are representing their countries this month and when and where you can catch them in action. Rice has been an ever present in the midfield for ​West Ham this season, breaking up play and putting the Hammers back on the front foot throughout games this term.

Ever since Rice declared he would play for England over the Republic of Ireland in February, Three Lions manager Gareth Southgate has included Rice in his last four squads and is clearly a big fan of the 20-year-old. He started the midfielder in both of England’s victories last month against Bulgaria and Kosovo.

Rice is the only player in the West Ham squad who has been called up for the England squad and is set to start against Czech Republic on Friday in their UEFA European Championship qualifier in Group A. The winger has been in excellent form so far this term, scoring three times in the Premier League already, one more than he managed in the whole of last season.

He joins up with a Ukraine side who currently sit top of Group B in Euro 2020 qualifying, with 13 points from five games. They sit five points clear of second placed Portugal, albeit the Portuguese do have a game in hand.

​Yarmolenko will look to keep up his good form and help Ukraine maintain their lead at the top of the group when they face Lithuania and then Portugal, with both being at home. The midfielder has only played once so far in Euro qualifying but has been called up by Steve Clarke for the upcoming games against second place Russia in Moscow and minnows San Marino in Glasgow. However, despite this the 25-year-old has still been called up to the Democratic Republic of Congo squad this week for their upcoming friendlies against Algeria in Blida and the Ivory Coast in Paris. The former Corinthians defender has been called up to the Paraguay squad though for their two friendlies over the international break, both against European sides, with the first one up against Serbia in Krusevac before he faces Slovakia in Bratislava. He has been called up to play for Montenegro, who are in Group A alongside England but will not feature against the Three Lions, with Montenegro set to face Bulgaria and Kosovo in the coming days. 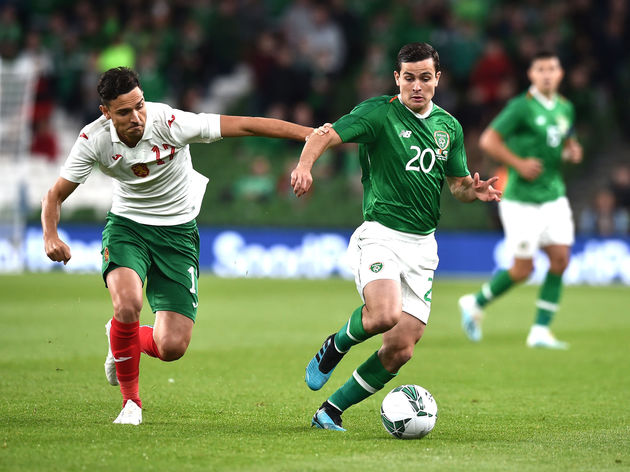 It is a very tight group, with Ireland sitting two points clear at the top ahead of Denmark after going unbeaten in their opening five qualifying games.